The First Yoga Retreat Onboard a Cruiseship in Greece

You are here: Home / Fitness News / The First Yoga Retreat Onboard a Cruiseship in Greece

Water, surrounding us, and we let ourselves float so that it can take us, with the help of the captain and his cruise ship, in places which hold a strong Greek element. The breath that passes over it and caresses the earth is pure and healthy and takes away the loneliness of the people, because it is moving and endlessly swirling. Exercising yoga on board for me was an unprecedented experience, full of energy. When crossing the sea you feel that you leave behind anything that troubles you, negative energy disappears and what remains is a sense of well-being and joy

Mykonos, Patmos, Heraklion, Santorini and an intermediate stop at Ephesus

When I set my eyes on Ephesus I felt a positive energy and my mind imagined riding amazons. Eventually, I learned its history and I understood why. According to ancient traditions salvaged by ancient Greek writers, historians, geographers etc., Ephesus was allegedly inhabited by the Amazons during the prehistoric (mythical) times who were moving from the Caucasus and carrying out raids and occupying several regions in Asia Minor – cities that took the names of the most skillful, like Ephesus, Smyrna, Kymi, Myrina and Sinope among others.

Strabo further reports that in later years these cities worshiped the same  eponymous Amazonian heroes and even created coins with Amazonian graphs. Specifically, the Ephesians during the 5th century BC, announced a competition among the most infamous sculptors of that time for the construction of a statue that would be placed it in the temple of Ephesian Artemis, wishing to commemorate the eponymous Amazon Ephesus. 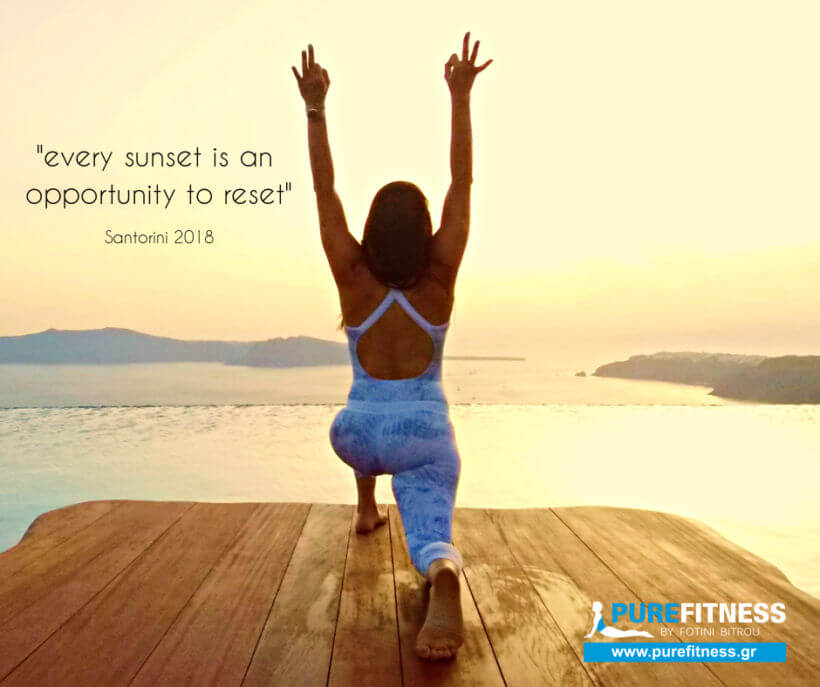 “It’s the island’s energy” the locals say, which is responsible for the inconceivable experience that many attribute to this destination. This is the same energy that inspired leading artists to devote their works to the island, like Odysseus Elytis dedicating to Santorini his “Ode”, one of his best creations.

Santorini belongs to the Aegean’s volcanic arc and is considered to be an active volcano along with Methana, Milos and Nisyros

Nevertheless, what motivates visitors is the energy and the “vibrations” they feel coming here. That’s why I chose the magical Cavo Tagoo from Imerovigli’s side, to give an energy yoga class with emphasis on the development of all our senses.

The view that I witnessed as the ship approached the island is simply extraordinary. A steep, 300-meter-long red-black rock, starring in this breathtaking scenery, while on the edge of the cliff, white houses and blue domes make up a truly unique picture.

We understood that when this magical trip will be over, nothing will be the same again.

Trip to Kythira in a Unique Yoga Retreat

Trip to Kythira in a Unique Yoga Retreat